No Matter HOW MANY AMERICAN FLAGS he may put behind him on stage trying to look Presidential, Donald Trump is dangerously PREJUDICIAL, which is the polarizing opposite of Presidential.

In Trump’s recent campaign rally in Ohio leading up to that state’s Presidential primary, as the angry crowd of his supporters chanted “BUILD THE WALL” over and over, Trump let it slip that his daughter Ivanka recently told him he has to start “ACTING PRESIDENTIAL”. This is very telling about the underlying truth about Trump, to the extent that his own daughter apparently sees the problem.

One cannot easily “act Presidential” when one first and foremost is genuinely and dangerously prejudicial. Furthermore, one doesn’t “ACT” Presidential…either one IS genuinely Presidential, or they are not.

That Trump’s daughter Ivanka has to remind her reality show con man of a father to ACT Presidential is very revealing in and of itself. And speaking of con-artists, that is exactly what kind of person it would take to pull off ‘acting Presidential,’ with SO MUCH prejudicial character and toxic energy coming from their campaign…That requires quite a ‘con game’…quite an ‘art of the deal’, to use his own words.

Is it Presidential to repeatedly on many different occasions, call for individuals being removed by security at his rallies to be beaten up, offering to “pay the legal bills” to rough them up, to say “I’d like to punch that guy in the face”, on and on?…Is it Presidential to call for the killing of the families of someone deemed a terrorist?

Is it Presidential to whip up huge chants from your crowds by describing the vast majority of Mexican immigrants in our country as “rapists and violent felons”? Is it Presidential to say that Sen. John McCain, former Vietnam prisoner of war, is not a hero…that Trump likes ‘people who don’t get caught’? If you answered yes to any of the foregoing questions, you are a huge part of what is wrong in our country today…Honestly, you aren’t part of “making America great again”…You are only a part of “making America HATE again”.

And what part of building a wall makes America “great?” What makes America GREAT in the first place is that we are all about UNITY, not WALLS and DIVISION. We are a nation that is all about immigrants and diversity. The fundamental underpinnings of the Trump campaign do not generally reflect those American values, they fundamentally oppose them in key areas.

It is one thing to be angry about corruption in government, and to speak out in the name of LOVE, UNITY and DIVERSITY to take it back for “We the People.”(akin to what Bernie Sanders supporters are effectively and genuinely doing) But it is yet another much more polluted, insidious and totally UNAMERICAN thing to be hateful with that anger…to angrily chant mean-spirited and divisive rhetoric, and support someone with such a dishonest and corrupt, con-artist character.

As I’ve written about before, everyone needs to Google “Trump and Organized Crime,” and familiarize themselves with the many articles reporting on Trump’s extensive business connections with organized crime during the time he was building his ‘casino empire’ in New York and New Jersey. Why would you ever just ignore something like that in a Presidential candidate? That is incomprehensible! It reflects very badly on the not just hateful, but the unethical, immoral character of a significant portion of voters in our country.

In short, Trump’s angry base have grown mainly because he is PREJUDICIAL, and that is what has led to Trump’s own daughter having to tell her father he has to start ACTING “Presidential”. But as I said above, the two are like oil and water. One either exudes the American Presidential values of diversity and unity, or they do not.

Trump does not, and that is what makes his effort to “act” Presidential a CON on the American people, specifically Conservative Republicans and Independents, who are understandably hungry and desperate for a revolution of their corrupt party and government. But there’s NO EXCUSE for thinking this is the way to go about it. 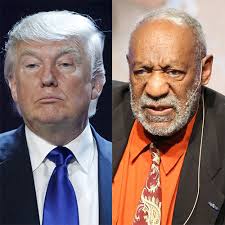 Lastly, we all know Donald Trump is famous for saying he could ‘shoot someone in the street’ and not lose one member of his devoted fan base…Today as I write this, an MSNBC commentator stated that Donald Trump’s favorability rating with the general electorate is LOWER than BILL COSBY!

Word on the street is that the Trump campaign responded to this by proudly claiming that his polls show him LEADING Bill Cosby in the general electorate…We want to be clear, according to OUR polls, he is at least TWO POINTS AHEAD of Cosby (margin of error 3 to 5 points, whatever!)…Listen, he could roofie (spike) a HUNDRED bimbos’ drinks like Megan Kelly, and still never lose even ONE voter in his beloved fan base!…And WHAT’S MORE, we predict that just like Dr. Ben Carson, we will ultimately get Mr. Cosby’s ENDORSEMENT!

(Connie Bryan is a writer in Sacramento, CA…Catch all of her material on her website and blog at www.conniebryan.com)