On the messy topic of BOTH Hillary and Trump…During this election cycle, we are constantly hearing the term being thrown around on both sides about the “establishment”. And I want to point out something very important on this topic that I haven’t heard anyone else talking about…

“Establishment candidates” are only a problem because of “ESTABLISHMENT VOTERS!” And make no mistake, “LOW INFORMATION VOTERS” (along with their second cousins the “LOW CHARACTER VOTERS”) are just as dangerous to our American democracy. Please let that sink in for a second before reading on.

In a nutshell this week you could say Jeb Bush finally TRUMPED Trump in the last debate, and Hillary is really beginning to “feel the Bern”…So I’d like to share a few key observations from the last two Presidential primary debates(including the most recent GOP debate before this Tuesdays New Hampshire Primary.)

First, regarding Hillary…As I heard someone recently say, if she isn’t the POSTER CHILD for the “establishment” in Washington, then there IS NO establishment!

In the last Democratic primary debate, Clinton made a concerted effort to go over the top in order to act like she agreed with Senator Sanders on holding Wall Street to the flame. But as always, her 800 pound gorilla in the room was grinning on his leash next to her as she spoke…

His grin belying the fact that Hillary has been given more campaign contributions by the “Too Big to Fail” Wall Street banks than ANY other candidate, including the Republican Presidential candidates.

“And we’re not talking about some tenuous relationship between Hillary and Wall Street. We’re talking about the fact that, according to the Center for Responsive Politics, four of the top five lifetime donors to Hillary’s campaigns have been the employees, executives and Pacs of mega Wall Street banks: Citigroup, JPMorgan Chase, Goldman Sachs and Morgan Stanley – the same too-big-to-fail banks that almost brought the country to ruin in the 2008 crash and had to be bailed out by the taxpayer.” End Excerpt. Here’s a link to entire article: http://wallstreetonparade.com/…/hillary-clinton-will-not-c…/

It doesn’t take a high IQ to clearly see that such facts translate to Wall Street KNOWING that Hillary is safely in their pocket to stay, and always has been.
So regarding the popular references we keep hearing about the problem with “establishment candidates”…we need to start drawing more attention to the problem of the establishment VOTERS who keep ignoring these facts and electing them!

If you have an OBVIOUS “establishment candidate”, or for that matter, as I said above, an OBVIOUS low character, con-man candidate (Trump), the “establishment” can only benefit from them if the ESTABLISHMENT VOTER (or in the case of Trump, the LOW CHARACTER/LOW INFORMATION VOTER) votes them into office!

Senator Bernie Sanders has the quintessential revolutionary message that I and many other concerned Americans have been writing about for a very long time (See my oped from several years ago, among many others, on my website and blog entitled “Would Jesus Be a Rush Limbaugh Fan”) So that being the case, WHY would anyone ignore the clear corruption and obvious “Washington establishment” connection related to Hillary’s career, and choose NOT to support the genuine, honest revolutionary movement to reform our corrupt government system that Senator Sanders is presently leading?

The answer to that question is shameful and disturbing for our country, and it involves what I’m referring to here as “establishment voters”…a surprising number of Americans who decide that they’d much rather support someone they know in their heart is dishonest…someone they know is part of the corrupt establishment, because they aren’t absolutely sure an honest, reforming straight-shooter can succeed!

There is no excuse for such an American voter “sell out” mentality to the status quo. There is NO EXCUSE for voting for a dishonest candidate (whether or not former Secretary of State Madeleine Albright tells you that you will go to ‘Hell’ as she said at a recent political rally, about any woman who does not vote for Hillary) or voting for one with a reportedly corrupt track pattern (whether or not they claim to be ‘anti-establishment’…corruption is corruption, establishment-oriented or not).

When you vote like that, knowing the candidate you are supporting is of low character and/or a part of the corrupt government ‘establishment’, then YOU become part of that corruption and government establishment yourself, by taking an active part in sustaining it. When someone votes like that, ignoring the honest experienced candidate(s) willing to work to change the corrupt system, they become part of the problem, and not part of the solution in getting government back in the hands of the American people rather than controlled by corporations.

Remember this…We are all Americans before we are Republicans and Democrats. As such, Americans must demand a certain high standard of character and virtuous conduct throughout the lives of anyone wishing to be considered for the highest office of our land.

That said, let me now focus on alleged “outsider” Donald Trump, who has made much of his wealth admittedly buying off high level politicians IN THE ESTABLISHMENT…How does that make him OUTSIDE the establishment? That’s absurd, and it is what we call a “logical fallacy”.

With regard to his many reported business ties to the Mob in building his casino and hotel empire in New York and New Jersey (Google Trump and Organized Crime to see for yourself)…At a minimum, Americans don’t elect someone to the office of President who has a history of sustained business connections to companies run by organized crime families.

At a minimum, Americans don’t elect someone to the office of President who would make a statement putting down a former Vietnam prisoner of war (Senator John McCain), saying that Trump doesn’t see him as a hero…he only sees military heroes as those who “don’t get caught” by the enemy…At a minimum, Americans don’t ignore such low character, vulgar comments. Because you see, those kind of comments MEAN SOMETHING about the loser spewing them.

QUESTION: Did Trump serve in the military? No he did not. He pursued college deferments during the Vietnam draft. Now he is putting on a side-show running for President making disrespectful comments about a decorated prisoner of war. Talk about a valid reason for voters to be reserving a special place for themselves in ‘Hell’!

If Trump had served in the military, he would likely have a bit less low character and a bit more moral fiber. Here’s an excerpt from an article on this topic by Politifact:

“He’s a war hero because he was captured,” Trump said July 18, 2015, during an interview in Ames, Iowa. “I like people who weren’t captured”…”McCain ended up in a Hanoi POW camp after his Navy dive bomber was shot down in 1967. He broke both arms and a leg as he ejected. He endured enormous pain and torture and spent over five years in captivity.” End of excerpt, here’s the link to the full story:http://www.politifact.com/…/…/jul/21/was-trump-draft-dodger/)

Back to my short list of who we DON’T elect as Commander-in-Chief…As much as many may feel strongly about the need to limit immigration coming into this country illegally that arguably makes it harder for Americans to find jobs, at a minimum Americans don’t elect a vulgar blowhard to the office of President who refers to the vast majority of Mexicans entering the country as being “rapists and dangerous criminals”…

And at a minimum, Americans certainly don’t elect someone to the office of President who has a history of trying to use “imminent domain” for his casino empire, in which he tried very hard to force an elderly woman out of her home in order to bulldoze it and build a LIMOUSINE GARAGE for his casino.

Tonight in the most recent GOP debate, this specific topic of “imminent domain” came up resulting in not only some of the biggest fireworks of the night, but also a very telling, eye-opening moment into the low character of Donald Trump.

One of the moderators reminded Trump that he has been quoted recently saying that he “LOVES imminent domain”. In typical Trump spin tactic fashion, he started his response by complaining that he had been the frequent target of attacks on this topic with negative campaign commercials by other candidates.

Then Trump began singing the praises of the government’s use of imminent domain, stating that we would never be able to build roads, bridges and infrastructure without it. But this was totally out of context compared to how he has tried to use it in the building of his personal empire, which was the content of the negative campaign commercials he would characterize as unfairly “picking” on him. 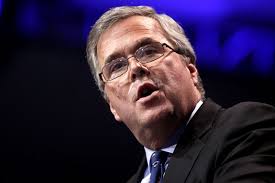 And just as I was about to start yelling at the TV, begging someone on the stage to hold him accountable on this, JEB BUSH of all people finally stepped up and came to the rescue.

And let me just say for the record, I am not a Jeb Bush supporter. We don’t need another family DYNASTY in the White House…We didn’t need TWO Bush’s elected President, let alone THREE. And of course the very same can be said about the establishment nature of the Clinton dynasty as well.

But Jeb Bush outdid himself by stepping up and HAMMERING Trump by making that very point…Paraphrasing, he basically said hold on Donald…You are talking about the government’s use of imminent domain for PUBLIC USE, but what you did was try to use it for your own PERSONAL PRIVATE GAIN trying to force an elderly woman out of her home so you could build a limousine garage for your casino.

As Bush was trying to say this, Trump was sarcastically and dismissively flipping his hand at Bush like what he was saying was not true, which was a very telling moment showing Trump’s dishonest character. Everything about what Bush was saying was absolutely true, and Trump couldn’t put out Jeb’s flame.

When Jeb wouldn’t back off, Trump actually tried to use more spin to say that the woman “decided she didn’t want to sell”…OF COURSE she decided she didn’t want to sell! That was what Trump was trying to overcome using imminent domain with her all along, to force her to sell against her will, all in order for him to build a limousine garage for his casino. Miraculously, he ultimately failed in that effort. But here he was during this recent debate trying to deny that was what he had tried to do to her using the power of imminent domain that he has praised so much of late.

At one point Trump had the crowd turning on him during this exchange, after he put his finger over his lips and actually told Bush to “be quiet”. He said at least twice, that Bush was just “trying to be a tough guy tonight”. When he did that, Bush should have done what I’m pretty sure I would have done, and walked away from his spot, walked over to Trump’s spot on the stage, and told him at close proximity, for the entire viewership to witness:

“Donald, I wasn’t the one trying to kick a widow out of her home to build a limo garage…And you don’t get to tell me to be quiet…That’s not gonna fly…I will say whatever I want to say about you and your character here tonight, and I’m telling you now on national television, standing two feet away from you, you DON’T have the character to be this nation’s President.”

But the unusually strong negative reaction to Trump by the audience at that point in the debate will have to suffice for now, to give us hope that we can overcome the numbers of establishment voters and low information voters helping to sustain our corrupt government system for way too long.

Connie Bryan
(Connie Bryan is a writer in Sacramento, CA…Check out all of her material on her website and blog at www.conniebryan.com)